106 achievement earned.
All 96 tables completed at 100%
Upgrades and challenges are maxed out. 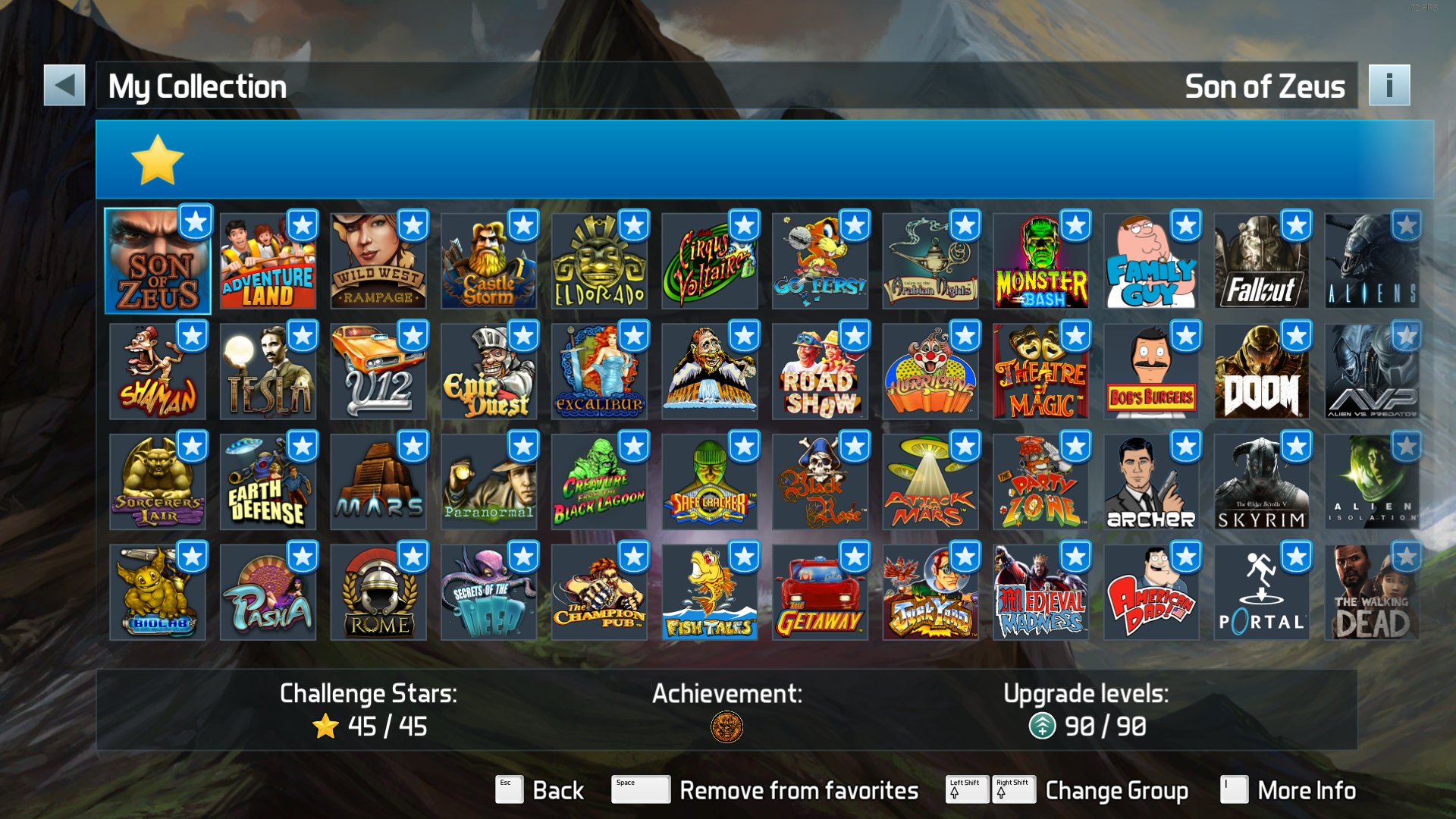 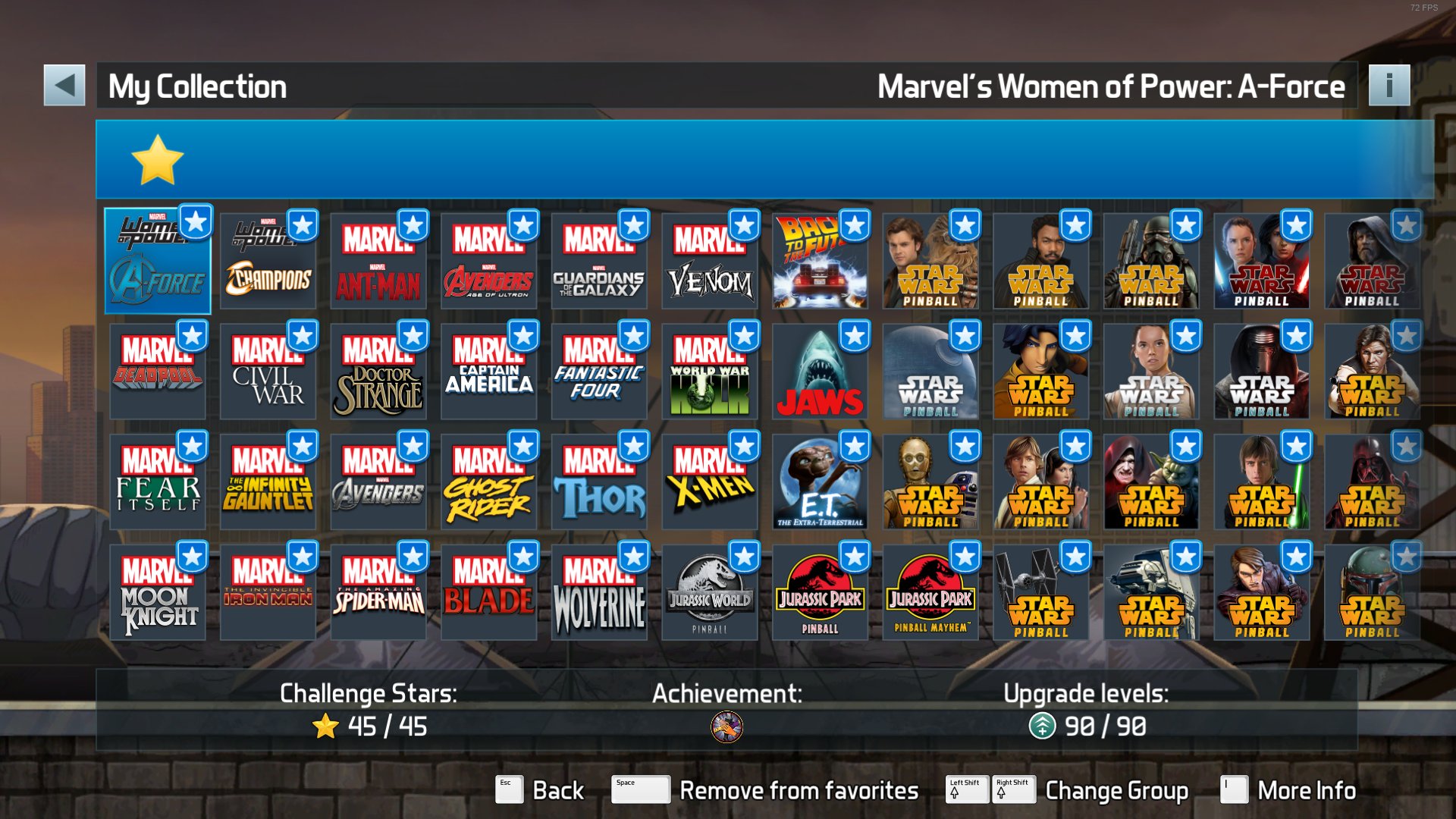 Is that the word?

I've got a grand total of 1 table to that stage with probably another 3 or 4 that are very close (everything except the slow motion maxed). I'm still trying to just get table achievements and only got half of those so far.
1

I was just throwing shade. I can't even finish a basic rpg. Buying and finishing all of that is a testament to your determination and skill.

The real question is, do you still wanna play pinball after that?

I know when I finally got all the wizard goals in TPA (this was probably up to season 5), I was done with the game for a month. And then more tables came out, which I felt I'd get to in good time, and then I tried opening the game on my laptop, which immediately wiped all my progress from the main computer for reasons FarSight doesn't care to fix. That effectively killed off any desire for completionism.

But hats off, because that is a mammoth mountain of content you conquered there, tandigab!

Yes. I still feel like playing pinball more, participating in tournaments, playing other Pinball games, etc.
Completing FX3 was not a hard work. It was a time consuming task. Completing TPA was much much more difficult. So I can understand your anger about loosing TPA achievements. 10 percent of FX3 tables can be compared to TPA in difficulty. TPA was easier to play and nudge but harder to get trophies.
I play TPA very rarely for several reasons, but not because I had earned all trophies of TPA. I reported and recorded/uploaded several bugs to them but they never fixed any. You can check how many topic I started with several bugs. They only promised but never fixed any. I moved to steam from PS4 becase PS4 is occupied by my children all day. My TPA is on the PS4. PS4 is connected to a TV with a huge input lag (50 ms in game mode). I got used to it that time when playing TPA because TPA more permissive about aiming and the so called 'vacuum ramps'. You dont have to aim in that exact time. Little earlier or little later will do. Ball will go up on that ramp.
FX3 is so much different. Now I know why I did not like FX3 on PS4. Cannot shoot up in a ramp. I bought afair 3 or 4 williams packages for PS4 but seldom played and never enjoyed. Looked much better than TPA but TPA was more fun to play. Then I bought a new PC and a 144Hz monitor. Installed steam and FX3 with the free table (Fish Tales). When played it first I was shocked how different it was. I shot for the ramp ball went up on the ramp unlike it did on PS4. This was the first time I enjoyed FX3 and know I want it all (williams for the first time). Then finished (maxed) all williams tables so bought all the original ones last December when they were on sale.
After this experience when I try to go back sometimes to PS4 and TPA and my laggy TV I loose interest in 5 minutes and rather switch to play FX3 on PC.
Well if I had TPA on steam I would play it sometimes. I loved TPA that time I played, but now I prefer FX3. PS4 is for my children and Fortnite.
I bought Zaccaria Pinball as well but played rarely. I got lost in the many settings, but I will plod through it and play it. There are some Zaccaria tables I played a lot when I was a child in the 80's (Pinball Champ, Locomotion, etc.)
I hope some new tables from Zen soon.
I will never stop playing pinball. I want to play real pinball too. I was to go to the Hungarian pinball museum to Budapest (100km distance from here) in March but could not because of the corona virus. I will there once and want to go again. I hope it will open soon and I can go then.

tandigab said:
I hope some new tables from Zen soon.
I will never stop playing pinball. I want to play real pinball too. I was to go to the Hungarian pinball museum to Budapest (100km distance from here) in March but could not because of the corona virus. I will there once and want to go again. I hope it will open soon and I can go then.
Click to expand...

Go take the Zen Studios tour! I think they offer it in Fridays and it includes admission to the Budapest Pinball Museum.

tandigab said:
Then I bought a new PC and a 144Hz monitor. Installed steam and FX3 with the free table (Fish Tales). When played it first I was shocked how different it was.
Click to expand...

Yep! I turn off vertical sync in the game settings, and in the NVIDIA Control Panel I set vertical sync to on and Max Frame Rate to 143 FPS globally with my GTX1080 to slightly reduce input lag, and I have Low Latency Mode at Ultra just for my pinball games with my LG 32" 2560x1440 G-Sync monitor.

I have a difficult time going back to TPA and can't even remember the last time I played. I purchased every single table that was available including all of the Stern tables.

Really enjoying FX3 on the PC.

Best overall improvement in gaming visual quality was moving to the G-Sync monitor. I liked it so much I purchased a new 65" LG OLED TV that included G-Sync for my game consoles.

That would be good to go there, but that's unlikely I can go on Friday. I will go with my family to my friends living in Budapest. They work on weekdays (we too). We will go on a Saturday I guess. There we'll part to 2 groups. Big boys (my friend and I) will go to some pub and play pinball. Wives and children go wherever they want (do some jumping, shopping, cinema, etc.). My older daughter might join us. We'll go to play real pinball with my friend together as we did some 40 years ago. How awesome it will be!

Did you realise that the game behaviour changes with the change of the fps? FX3 is said that it is optimised for 50fps. Other than that can cause issues especially on original tables. Cannot shoot ramps or much harder (Rome). Cannot shoot "get" and "out" spot targets in Biolab. Can shoot in between them. But never the spot target or exteremely hard. Cannot even launch the ball at full in Eldorado at 100fps, if you fully pull plunger and release, ball will stay steady. You can launch at 90% but cannot at 100%. Also very hard to shoot the ball into the idol's mouth with the right flipper. Try it out. Venom Jailbreak minigame (under the playfield). If you shoot into "Escape2/Extraball" saucer it will kick ball to the right flipper always at 200fps, 144fps, 100fps, 75fps, even at 50fps. If you set 72fps ball will go to the middle always, no exception and no way to catch it.
So if you happen to encounter some strange behaviour, or extremely hard to shoot target that you think cannot be purposely designed so by Zen's then switch fps to something different. I play 72/75/100/144 most of the time (50fps is too jerky).
Last edited: Jun 6, 2020

Actually the game is tuned by Zen at 60fps. I know there are weird ball behavior on Getaway, AFM, Black Rose, and I believe Party Zone with anything greater. I wasn’t aware that Zen originals also were affected. It would be great if one day high frame rates were built into the game, so letting Zen know where the problems are would help them greatly. This is sort of what they are going to be dealing with in introducing Williams physics to those tables.